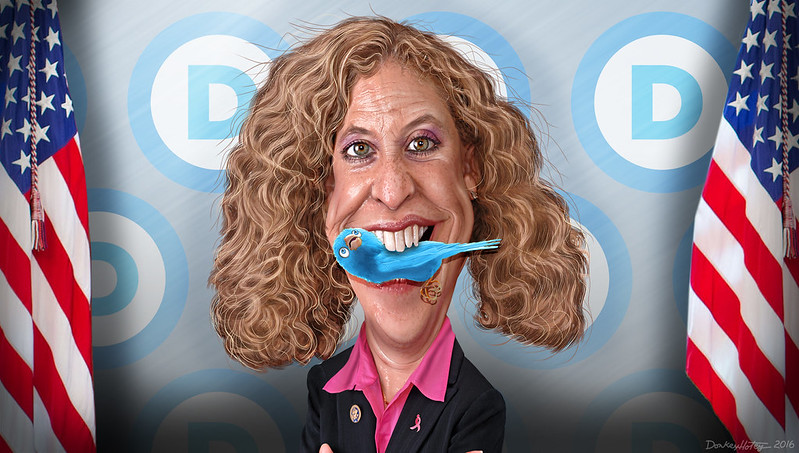 The time has come. The DNC Chair Florida Rep., Debbie Wasserman Schultz, has got to go. She symbolizes the worst of politics in the Democratic establishment. She abandoned any vestige of impartiality as DNC chair long ago, and masquerades as a progressive while pushing forward an aggressive corporate agenda. Next to you-know-who, she is likely the most reviled politician by Sanders supporters. The only uncertainty is exactly what should we do about it. Instead of just venting our ire onto social media newsfeeds, friends, family, and unsuspecting passersby, let’s focus our energy and execute a very simple plan.

But first, the case against Schultz…

Tzar of the DNC

Bernie supporters are most familiar with her machinations, such as freezing Sanders out of his own voter files, or purposefully scheduling debates to minimize his exposure. What they may be less aware of is that in 2013, President Obama was disappointed in her performance and considered making moves to replace her. In response, she began rallying supporters who would suggest that the move was motivated by sexism and anti-Semitism. Not wanting to become embroiled in controversy, Obama backed down. This victory likely emboldened Schultz, who since then has become more brazen with her partisan politics.

Perhaps the best example is the, technically legal but still reprehensible deal, she struck with Hillary Clinton to share fundraising, via the Hillary Victory Fund, which you may or may not know overlaps with the superdelegate fiasco. Ever wonder why so many superdelegates endorsed Clinton so early on and so few sided with Bernie (520 to 41, to be exact)? This can be traced in large part to the Schultz-Clinton fundraising pact, which circumnavigates campaign finance laws by allowing a single donation to be made to Clinton, the DNC, and 32 state parties simultaneously. This allowed wealthy donors to legally raise their individual contribution from $2,700 per year to $360,000 per year when they donate to the Hillary Victory Fund. However, beyond the absurdity of a more than 13,000% increase in the maximum donation, is that the people who stand to benefit financially also happen to be superdelegates. Yes, that’s right, of the 719 superdelegates, 438 are members of the DNC, 193 are House Democrats, and 47 are Senate Democrats, all of whom stand to gain from the Hillary Victory Fund, which has promised to share this money with the DNC and the state parties, for the purpose of directly helping “down ballot” Democratic candidates.

Given this, is it any wonder that 72% of the superdelegates have endorsed Clinton? Absolutely not, for every dollar that the fund gets, they get a cut, and if Hillary wins the nomination, she keeps raising money, and they keep getting a cut. The deal may end up backfiring for most states, however. As reported by Politico, to date less than $4 million of the $60-million-dollar fund has gone to help state parties. Bizarrely, all of which was immediately transferred to the DNC, to be, in theory, disbursed amongst the candidates that they prioritize. Now why would they do that? According to Politico, the vast majority of the Hillary Victory Fund has either been spent on the Clinton campaign, transferred to the Clinton campaign, or transferred directly, or indirectly from the states, to the DNC.

Clinton supporters and establishment-loving Dems will argue that superdelegates don’t count until the convention, and even then only serve to ratify the pledged delegate winner in the event that they fall short of the threshold. This is technically true. In ’08, when Obama beat Clinton in pledged delegates, but did not have enough to formally secure the nomination, a host of superdelegates defected from Clinton’s camp, securing Obama the nomination. However, if it is truly the case that they don’t count until the convention, then why count them at all until they are needed? Well, in the age of mass media, where perception becomes reality, it’s profoundly useful to have every mainstream news station include superdelegates in their tallies to reinforce the sense of Clinton’s inevitability.

Schultz’s record as a congresswoman reads more like a Republican. She has voted to roll back Dodd-Frank, and to block the SEC and IRS from disclosing corporate political spending. She supports mass incarcerations for non-violent drug offenders, and is against the use of medical marijuana. She also voted to fast track the Trans-Pacific Partnership, a trade deal that even Clinton now opposes. However, recently she has made headlines in one of the more disturbing moves of her political career. It revolves around her support of the payday loans industry.

Payday loans are short term high interest loan targeting Americans who need money immediately, but have no other way to obtain it. The loans come with a commitment to repay the amount borrowed on the following payday. A typical two-week payday loan with a $15 per $100 fee equates to an annual percentage rate of almost 400%. About 12 million Americans use payday loans each year. The real problem comes when people are unable to repay the loan within two weeks. Stratospheric interest rates quickly lead to an almost insurmountable debt trap. In short, payday loan companies are legalized loan sharks. Schultz’s support of this industry have led to her nickname, “Debt Trap Debbie.”

Schultz is siding with Republicans by co-sponsoring a bill designed to protect payday lenders from regulation, undercutting the Consumer Financial Protection Bureau (CFPB), an agency set up by Elizabeth Warren to protect Americans from practices that led directly to the ’08 financial collapse. Warren and the CFPB have been seeking to regulate the payday loan industry and curb their predatory conduct, while still allowing Americans to utilize the service. In response, Republicans and Schultz have teamed up to push a bill through Congress that would permanently cripple the CFPB’s ability to protect consumers against payday loans. The bill has the Orwellian title, The Consumer Protection and Choice Act, and despite claims by Schultz and other supporters that it benefits Americans, more than 200 consumer and civil rights groups, including the NAACP, have written a letter to Congress urging them to defeat the bill.

So the question becomes what can we do to end Schultz’s tenure as DNC Chair and remove her from any semblance of power. The answer? Tim Canova, political newcomer and progressive Berniecrat. He’s a law professor who has decided to take on one of the most powerful and connected Democrats in Congress – Debbie Wasserman Schultz. Two of Canova’s most notable political experiences are working with former New Mexico Gov. Gary Johnson against the drug war and the private prison industry, and his role as a campaign advisor to none other than Bernie Sanders.

Like Sanders, Canova is a true progressive. He’s a vocal opponent of the Wall Street bailout and supporter of the Occupy movement. He is for increased government transparency, prison reform, marriage equality, and is a staunch advocate for fighting climate change. Like Sanders, Canova has rejected corporate campaign financing, and Super PAC money, instead choosing to rely on a large volume small donors to fund his campaign.

Despite what might seem like long odds, Canova has closed both the fundraising and familiarity gap. His grassroots campaign has raised over half a million dollars from more than 40,000 individual donations. Thanks to his political alignment with Sanders, Canova, is becoming well-known both inside and outside Florida’s 23rd district. His campaign, however, has not been without its obstacles.

“Debt Trap Debbie” recently used her influence as DNC Chair to ban Canova from accessing the Florida democratic voter database (does this sound familiar?). Fortunately, Canova fought and won this battle, but, knowing Schultz, there are more dirty tricks in store.

So, if you want to get some well-deserved revenge on “Debt Trap Debbie,” while simultaneously moving the political revolution forward by putting a true Sanders progressive in Congress, then here’s what you can do:

In the end, the political revolution will only be won if we take ownership of it. We may not have created this corrupt and broken system, but it is our responsibility to change it.

UPDATE: As a good reader just reminded me, if you live in FL 23 and want to vote for Tim Canova, you MUST register as a Democrat before Aug 1st in order to vote in the Aug 30th primary. Go here to find the links to register or change you party affiliation.

Joseph graduated with a BA in English from UCLA. He worked in entertainment for 10 years before deciding to pursue a career in science. Joseph studied Psychology at Columbia University and worked in cognitive neuroscience research at the Columbia University Medical Center. He is currently completing his pre-med coursework at UC Berkeley in preparation for a career in medicine. Joseph is a passionate progressive whose strongest political beliefs center on climate change, voter rights and campaign finance reform.

This website is not affiliated with the Bernie Sanders campaign.

This work is licensed under a Creative Commons Attribution-NonCommercial 4.0 International License